We were delighted to host the 13th ESSE conference at National University of Ireland Galway, Ireland.  There were 3 plenary lectures, 17 sub-plenary lectures, 80 seminars, 10 round tables, 5 special PhD sessions and a poster session as well as the ESSE General Assembly and book awards ceremony. 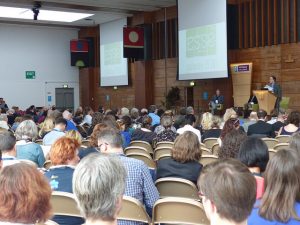 Approximately 800 delegates attended this very busy conference. Special events included the Welcome Reception, a Sean Nós Song and Dance Performance from The Centre of Irish Studies, readings by the novelist Mike McCormack and the poet Mary O’ Malley, the conference dinner in the Radisson Hotel (including Irish music and dancing performances), three plays by the Fishamble theatre company, and a special closing seminar on women and contemporary theatre from the Druid Theatre Academy. Delegates could enjoy a tour of the library and special collections on any day of the conference and the exhibition “Shakespeare Lives through Kenneth Branagh on Stage and Screen” was on display in the library.

Emma Smith, the Cultural Studies plenary speaker, entertained us with “The Biography of a Book: Shakespeare’s First Folio.” Since the theme of this issue of the ESSE Messenger is Shakespeare Lives, Emma Smith has kindly published her lecture. Paul Baker was the Linguistics plenary speaker, delivering a fascinating lecture entitled “Divided by a Common Language? A Comparison of Recent Change in American and British English.” Colm Tóibín, the Literature plenary speaker, captivated the audience with “As Things Fall Apart: The Response to Violence in the Work of W.B. Yeats and James Joyce.”

Liliane Louvel, ESSE’s President, addressed the ESSE membership at the General Assembly. There was applause for Alberto Lazaro and Smiljana Komar, who have been re-elected as ESSE’s Treasurer and ESSE’s Secretary for another three year term. The prestigious ESSE book awards were presented to the prize winners.

We look forward to the next ESSE conference in Brno in 2018!