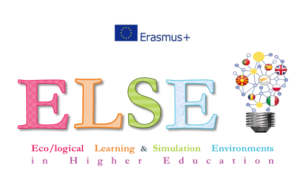 The Erasmus+ research project Eco/logical Learning and Simulation Environments in Higher Education, in short, ELSE, was registered as part of the key action, Cooperation for innovation and the exchange of good practices (Strategic Partnerships). The priority of the project is Higher Education and the development of skills – supporting the use of digital technologies to improve pedagogies and assessment methods. Its horizontal priority consists of (a) open education and innovative practices in a digital era and (b) the extension and development of educators’ competences.

END_OF_DOCUMENT_TOKEN_TO_BE_REPLACED

As already known, Professor Fernando Galván, the former ESSE president, has been awarded the O.B.E order of the British Empire by the Her Majesty Queen Elizabeth II.

Click on the Picture Gallery, then on Start Slide Show to see the pictures taken at the ceremony.

The summer school will be organised for doctoral and postdoctoral researchers and will be held at Landau (Germany) from August 20th to 24th 2018 focusing on the topic: “Political Masculinities in Europe: New Definitions, Methods and Approaches”. The Summer School will feature four key-note speakers and is organised by Kathleen Starck (University of Koblenz Landau) and Birgit Sauer (University of Vienna).

The Summer School is funded through the Volkswagen Foundation and thus comes without tuition fees and features substantial bursaries for travel and accommodation. Participants have to apply via the English website until April 16th 2018: https://www.uni-koblenz-landau.de/de/landau/fb6/philologien/anglistik/Page/Research/internationalsummerschool 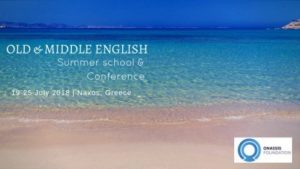 We are happy to inform you that registration is now open for the 3rd summer school program and conference on the history of English to be held on 19-25 July 2018 on the island of Naxos, Greece, under the aegis of the Alexander S. Onassis Public Benefit Foundation.

Certificate of attendance will be awarded to all participants plus certification of the 6 ECTS gained, issued by the University of Osnabrück.

The 3rd Old and Middle English Summer School in Naxos will also be organizing a conference on “New Approaches to the History of Early English(es) III” as well as thematic and poster sessions on: language change, historical morphology and syntax, historical phonology, historical sociolinguistics, linguistic theory and historical data, language teaching and dialectology (diatopic aspects), language teaching and diachrony (diachronic aspects). The 2018 Old and Middle English Conference will be held under the aegis of the Alexander S. Onassis Public Benefit Foundation. 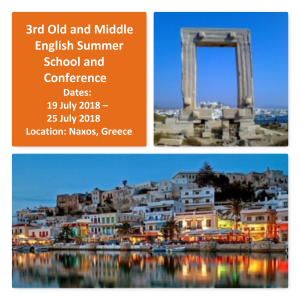 Registration fee: 35 euros, it covers the light lunches for the whole period of the summer school and the conference.

Accommodation: We can offer 29 beds at the municipality hostel (Vivlos/Tripodes village) for the whole period of the summer school and the conference (July 18-26).   Financial Aid: 4 scholarships available (of 250 euros each) for students of Greek universities. Applications accepted until April 15, 2018.

Financial Aid Instructions: In order to apply for a scholarship, please upload your motivation and your CV to the online application form before the 15th of April, 2018. 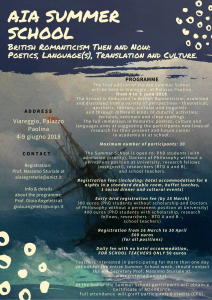 AIA (Associazione Italiana di Anglistica) is pleased to announce its forthcoming Summer School, which will be held in Viareggio (not far from Pisa), a special place for the British romantics as Shelley’s dead body was burnt to ashes there and a monument and a square are dedicated to him.

As you can see from the programme, there will be lectures by renowned international and Italian experts on Romanticism, and workshops for hands-on approach to the topic. The Summer School will be paralleled by a “Festival Shelley” with evening talks and events meant for the community at large and the tourists in Viareggio.

The Summer School fee is very low as we mainly want to attract PhD students, and we are looking forward to welcoming students from all over Europe.

Professor Fernando Galvan, our former ESSE president, has been awarded the O.B.E order of the British Empire by the Queen to distinguish him for his contribution to developing educational relationships between Spain and Britain. This is a very rare occasion to give such a tribute to someone outside Britain. 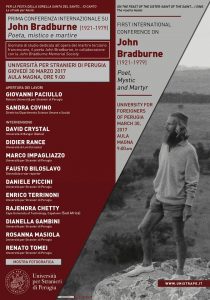 This conference is a tribute to a neglected poet and Franciscan martyr. It is a privilege to host it in Umbria. John Bradburne wrote many poems inspired by Umbria and Saint Francis, and one of the reasons for his strong African ‘sense of place’ was that the hills of Zimbabwe reminded him of the Apennine  and the Assisi The influence of Franciscan poetics and a theology of militant love, as well as a mystical wedding to Our Lady is recurrent in his themes. He is now recognized as the most prolific poet in the history of Anglophone literature having written twice as much verse as Shakespeare. French historian Didier Rance has translated his poems into French. An online corpus of his John Bradburne’s poems has been compiled and edited by the British linguistics author and reference-book editor David Crystal.

John Bradburne, FTO (Franciscan Third Order) was born into an English ecclesiastical family. After heroic war-time service (Military Cross)  with Gurkhan Indian Army in Malay and Burma, and miraculous survival in the jungle, he entered the Catholic  Church. He studied theology in Louvain where he was a novitiate (1950-52). In the 1950s, he embarked on spiritual journeys through France and  Greece. His pilgrimage to the Holy Land took him through Italy twice: to Umbria and Campania, where he lived for one year. He spent the last ten years of his life in a leprosy settlement in Rhodesia . During the Rhodesian civil war, he refused to leave his lepers; after being abducted and tortured, he was tried by the guerrillas and released, only to be shot. At the moment of his passing away and at his Requiem Mass in the Cathedral of Salisbury, inexplicable events occurred.

Certificate of attendance will be awarded to all participants plus certification of the 6 ECTS gained.

Please notice that the registration fees cover the accommodation in the municipality hostel for the whole period of classes.

Students will also be offered a discount of 50% for the ferry tickets, and a light lunch will be offered to participants.

New Approaches to the History of Early English(es) II

Celebrating 20 Years of EJES (The European Journal of English Studies)

2016 brings the publication of the 20th volume of the European Journal of English Studies (EJES). To mark this occasion, the Editors have curated a special collection of articles which not only showcases the breadth of scholarship that has been a feature of the journal over the last two decades, but also hopes to inspire contributions for future issues. The anniversary collection features an article from each volume of EJES, free to read, with a commentary from the Editors. It also includes an insightful introduction from Professor Kayman which is designed not only to look back on previous content, but also to inspire contributions for future themed issues.

You can see the Virtual Special Issue on the Taylor & Francis website here: http://explore.tandfonline.com/page/ah/neje-20th-anniversary-vsi.