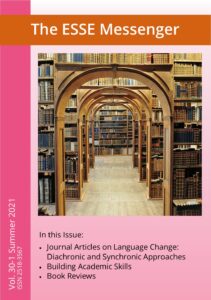 Change in languages over time seems to be an inevitable constant. All languages have undergone and, if not dead, are undergoing change. As Ferdinand de Saussure put it more than a century ago, “the linguistic river never stops flowing” (Course in General Linguistics, 1916). The English language has been no exception and topics addressing linguistic change have been—and continue to be—widely discussed from different areas or branches of linguistics, such as generative, historical, variationist or corpus linguistics. There is, however, much that still needs to be investigated.

Differently from other areas of linguistic research, the study of metaphor variation and change presents some uniquely difficult challenges for systematic linguistic analysis. The recent development of cognitive sociolinguistic theory has showcased the importance of the study of conceptual differences among linguistic varieties. This paper is intended as a contribution to this field of investigation: using statistical analysis of large sets of dialectal data, we will propose an analysis of onomasiological lexical variation and change across varieties of World English. In particular, we will focus on why particular emotion conceptualizations are more frequent in some of these varieties of English. Our analysis shows that local socio-cultural models of emotions affect lexical variation and change at the dialectal level.

Literary-dialect works are useful tools for dialect study as they are characterized by the presence of deviant spellings based on semi-phonetic spellings of Standard English. This paper analyzes these spellings and their sounds within the GOAT lexical set in the dialect of nineteenth-century Lancashire, according to the classification that Wells (1982) provides for RP [əʊ]. For this purpose, we examined nineteen literary-dialect works. In this endeavor, the deviant spellings related to that RP diphthong were gathered and attributed to their realizations in the dialect. This paper discusses the coexistence of the different sounds related to RP [əʊ] considering historical and sociolinguistic reasons.

This paper reports on an auditory analysis of the historical development of raised and fronted TRAP and DRESS vowels, and centralised KIT vowel in New Zealand English (NZE). For the sake of simplicity, three words from Wells’s lexical sets (1982) are used to refer to these vowels. We aim to prove that the realisation of the short front vowels in NZE is not the result of a single factor, but two competing hypotheses have had important roles in this process: new dialect formation and a vowel chain shift. An empirical investigation is carried out regarding a one-hundred-year-long period which considers speech samples of ten male New Zealanders born between 1890 and 1990. The results show that raised TRAP and DRESS originated from England and this finding is supported by the theory of new-dialect formation; they remained high and continued raising as the first steps of a vowel chain shift, while in England they lowered later as an innovation. Thus, the realisation of these vowels is conservative in New Zealand English. Later, DRESS raising triggered KIT centralisation, which was a twentieth-century innovation. Based on the results, it is also proven that it is a push chain consisting of three sequential steps. Furthermore, it is demonstrated that DRESS is still raising, therefore, the vowel chain shift is still in progress.

This paper explores the differences of the distribution and use of the modals and quasi-modals which convey deontic and epistemic obligation and necessity in Canadian and Indian English. More precisely, must and ought to are compared to their counterparts and their semantically related quasi-modals have got to and be supposed to. The aim of this paper is to provide new insights into the patterns of distribution between these pairs of modals and quasi-modals and to outline some possible reasons for the existing differences. For this purpose, the online Corpus of Global Web-Based English has been employed (Davies, 2013).