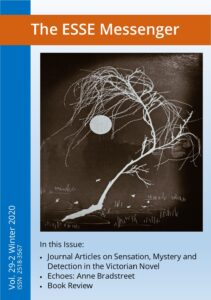 During the last decades, social networking sites have become our main of socializing. We create online self-representations in order to participate and the way we modify our lives to make them fit virtual stereotypes can alter our identity. Almost two centuries ago identity loss was a recurrent issue in sensation novels reflecting common social anxiety.  Irene Kelleher’s play Gone Full Havisham (2019) recovers Dickens’s Miss Havisham to portray this craze and its side effects. By means of Bakhtin’s theories of Carnival and dialogism and Foucault’s concept of discourse I will try to unravel how sensation masks, used in the 21st century as identities, are equally built, manipulated and lost.

This discussion will explore the concepts of spectacle and guilt in Charles Dickens’ Oliver Twist (1838) and Elizabeth Mary Braddon’s Lady Audley’s Secret (1862) and the treatment of the sensational characters in these novels. The aim of this article will be to reveal that the use of sensation is a way to shed light on the unpredictable intricacies of the human mind and the complexity of human experience. Considered as unworthy of literary praise in the period, or even dangerous devices and sources of undesired stimulation, Dickens’ and Braddon’s novels deserve particular recognition for their contribution to the understanding of the period’s controversial conception of criminality and guilt.

Guilty of ‘Penning’ a Newgate Criminal as a Hero for Posterity: Edward Bulwer-Lytton and the Case of Eugene Aram

By means of the fictionalisation of an actual criminal case from The Newgate Calendar, involving an enigmatic but appealing scholar, Edward Bulwer-Lytton provided an enthralling portrayal of a murderer which featured a criminal as the hero of his novel Eugene Aram (1832). In spite of its instant success, Eugene Aram stirred strong critical objections, which were mostly interpreted on account of its dubious morality and led the author to defend the right to indulge in crime and sensation. This article seeks to prove that the harsh critical reception that Eugene Aram met mostly responded to aesthetic rather than moral reasons, since, through Bulwer-Lytton’s double aim of attaining popularity, but also posthumous fame as a writer, he subverted established literary conventions and introduced narratological devices to create an ambivalent portrayal of a criminal, with the aim to turn him into a memorable character, that would ultimately contribute significantly to the development of crime fiction.

The popularity of Victorian sensation fiction reflects social and cultural changes in the Victorian age. This high demand for sensational stories, whether they were real or fictional, is connected with the social structure of Victorian England and the genre’s challenging of the conventional understandings of criminality. Accordingly, this paper explores the reasons for the recognition of sensation fiction in the mid-Victorian age, elaborating public perceptions of crime and their subversion. With reference to reviews on its content and effects on Victorian society, it investigates the realism of sensation fiction in relation to real criminal cases.

The main concern of this article is a close study of Anne Bradstreet’s recurrent focus in her poetry on health and healing in the physical and spiritual sense. For the Puritans in Bradstreet’s colonial New England, physical afflictions meant God’s trials closely associated with guilt and moral depravity. On the other hand, good health was commonly considered to be an indication of spiritual purity and redemption from sinfulness. It was therefore interpreted as a reward from God. In this regard, Bradstreet’s poetry, which embodies various allusions and explicit evidence, recurrently gestures to this fundamental Puritan dichotomy of illness and wellness.