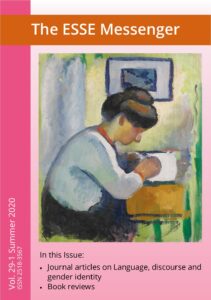 The prolific literary production of the American poet, playwright and feminist activist Edna St. Vincent Millay (1892-1950) was overlooked by critics and scholars up to the last decades of the twentieth century. Millay was for several years the symbol of the New Woman of the 1920s. Her poetic language and her rebellious attitude were the perfect trigger for a huge amount of American teenagers who were tired of the inherited moralist social norms and conservative moors of their society. Millay’s fresh and revitalizing lines bespeak mainly the popular will to undermine the traditional gender roles by means of a combination of conservative poetic patters and subversive ideas.

The purpose of this paper is to shed light on the portrayal of the female perspective in a largely male-dominated society of the Old South in Kate Chopin’s short stories: “Désirée’s Baby” and “The Story of an Hour”. The paper relies on the new historicist approach for the analysis of race and gender in Chopin’s “Désirée’s Baby” and marriage as a burden in “The Story of an Hour”. The paper concludes that the aforementioned issues did not only cause the re-inscription and interrogation of the female perspective but a major proliferation in the works of Kate Chopin as one of the predecessors to feminist writing.

The Story behind the Ink

The objective of this study is to describe the ways in which tattoos can be seen as acts of identity through personal discourse and a form of visual communication within a community of practice. This paper includes descriptive qualitative and quantitative research of people and their relationship with their tattoo(s) and their identity. The data of this study was obtained through a questionnaire broadcast online both in French and in English, for tattoo bearers of all genders. The goal of the survey consisted in discussing the individual story behind each tattoo and its wearer: is the story a matter of agency, identity, gender, social class, ethnicity, personal expression of experiences, emotions, grief, or a mixture of two or more reasons? How can tattoos be regarded as a form of language that shapes the self and identity of individuals?

This paper analyzes Frances Burney’s representation of the relationship between language and gender in her play The Witlings (1779). Through an analysis of verbal exchange and the written word in The Witlings, I argue that in this work Burney revealed a good deal of her own approach to literature and her idea of woman at the end of the eighteenth century, and more specifically of the woman writer, as trapped in patriarchal culture and conditioned by her social image.

Lars Gustafsson’s The American Girl’s Sundays (2006) is a welcome change to tales based in true crime, which often focus on the predominantly male murderer or serial killer instead of on the predominantly female victim.  The verse novel is also part of a larger countertrend resisting the hype accompanying killers, meanwhile paying little to no attention to the victim and what her life was and could have been. Gustafsson’s narrative, inspired by the murder of Colleen Reed in 1999, is narrated by the fictionalised victim herself. This article explores how the interweaving of Gustafssonian elements affects the narrative voice.

The Sound of Silence

This paper analyses how the language of the main characters from Thomas Hardy’s The Mayor of Casterbridge mirrors (and occasionally defies) Victorian gender roles. We will see how the masculine characters in this novel tend to use a more aggressive language which features imperative forms, commands and future tenses in order to impose their point of view and reinforce their dominance, while the feminine characters are more likely to use polite requests, courtesy words and modal verbs to convey the same meaning. We will also discuss whether the female characters’ silence might be considered a mechanism to subvert male dominance.

The Nonunitary Identities of Japanese Women

This paper discusses the development of Japanese women’s identities in the context of the accomplishment of agency in the field of foreign language study. In order to situate the identity within the feminist poststructuralist theory and SLA (second language learning) practice, the paper addresses Chris Weedon’s and Bonny Norton’s reconceptualizations of subjectivity as nonunitary. By doing so, the subjectivity is further analyzed in relation to the learners’ ‘investment’ in learning a foreign language, to explain the very process of subject formation. Through the analysis of the interviews with young and financially accomplished Japanese women, it can be understood that their subjectivities appear to be regulated by their commitment and desire for the English language and not solely Occidentalist longings. Therefore, this paper tries to pinpoint the trajectory of transnational Japanese women’s identity development and answer the question of what SLA situations and implications cause their identities to be interpreted in the context of struggle, or contestation.

This article proposes a historical perspective looking at the beginnings of feminist linguistics during the liberation movements and its link with the “politically correct” movement. Initially a mostly ironical left-wing expression, it was used by the right notably to denounce the attempt by this movement to reform the language used to describe racial, ethnic and sexual minorities. This attempt at linguistic reform rested on a theoretical approach to language use, with borrowings from feminist linguistic theories. This led to an association being made between feminist linguistic reforms and “political correctness”, thereby impacting the changes brought to the discourse about women.

The first-person pronoun I appears neuter in the English language but it generates certain semiotic and linguistic problems. One of them is its dual system of reference. In a conversation, the pronoun I stands for both the speaker or referee and a referent or the grammatical unit. In a wider context of Linguistics, Gender-studies, Literary criticism, Discourse analysis, and Conversation analysis the paper investigates the relation between the referent I and the referee I and argues that the gender of the speaker or referee I endows the referent I with a gendered signification.

The Skriker (1994), British playwright Caryl Churchill’s contemporary classic, and Drunk Enough to Say I Love You (2006), a shorter, more recent play give profound insight into the dramatic and theatrical representation of gendered aggression. The way female, male and genderfluid characters enact violence subverts cultural understandings of gendered violence. In The Skriker, aggression is personal, acted out, sensory and bodily. In Drunk Enough to Say I Love You, it is global, achieved through dialogue alone, and it is rationalised. The two plays reveal the performativity of gender scripts through theatrical means.

The paper examines a number of novels written by David Lodge to find out if the representation of women had changed throughout Lodge’s works written in different decades. Since it is often the case that women are represented through domestic, private spaces in Lodge’s novels, the paper inspects the places female characters occupy in the structure of the narratives and the places women inhabit in the fictional worlds of the novels. While closely investigating the chosen four novels that seem the most relevant to such an analysis, the research also includes some other novels by the same author in which the presence of domestic spaces is significant.

This paper’s aim is to look at how male vocatives are used in Seán O’Casey’s Dublin Trilogy through a multidisciplinary methodology that is Corpus Stylistics in which the author studies the linguistic features of the usage of vocatives in the literary context they appear. The depiction in these early 20th-century plays of Irish identity and Irish masculinity is represented through working-class male characters, providing thus, an identity that was familiar to the audiences of the period; however, the way in which male characters are addressed may also supply some information regarding how male characters are viewed in society, from being seen as powerful when addressed as ‘captain’ or ‘sir’, to feeling subjugated when addressed as ‘boy’ or ‘child’, amongst other examples.