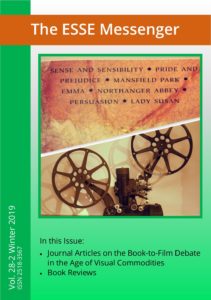 The Book-to-film Debate in the Age of Visual Commodities, p. 5

This contribution analyses one of the most challenging aspects related to the reception and adaptations of Dickens’s Great Expectations: the transposition of its symbolic and metaphorical network, focusing on animal metaphors and similes which express the dehumanisation of the main characters. The recurrence of these visual metaphors in transpositions activates a two-way exchange that begins from the target text and illuminates the source text, complicating the dialogic process implemented by each adaptation, which involves not only “the work we already know with one we are experiencing” (Hutcheon 21), but also the platform of works orbiting around it.

Deborah Cartmell and Imelda Whelehan have noted that fidelity may now reside in the fringes of Adaptation Studies, “but it dominates popular reviews and fan sites alike’” (qtd. in Brooker 45). I believe that this is true to a certain extent; Adaptation Studies may realize the fallacy of fidelity – that it does not pose as the end in itself anymore – but it continues to appear in academic publications all the same. What is more, medium-specificity discourses fall back on fidelity as well. Robert Stam emphasizes that the notion of fidelity “gains its persuasive power from our sense that (a) some adaptations are indeed better than others, and (b) some adaptations fail to ‘realize’ or substantiate what we most appreciated in the source novels” (14). It appears that if fidelity is still an issue it is due to this notion of persuasive power whereby value is attached to a particular meaning, or range of meanings, which if accepted by the audience awards both creator and product with value. Unlike cultural studies which, according to Stam, are “less interested in establishing vertical hierarchies of value than in exploring ‘horizontal’ relations between neighboring media,” thus rendering adaptation forms as part of a flattened out and newly egalitarian spectrum of cultural productions” in essence deeming them just another text, the very treatment of an intellectual property as a brand or franchise entails the notion of value and vertical hierarchies. Hence, this paper adopts a cultural perspective when examining Adaptation and more specifically the book-to-film debate by considering the context of production and more so the trend of branding intellectual properties. It argues that mainstream media franchise culture seeks the branded treatment at both the horizontal and vertical level of its intellectual properties including adaptations. Therefore, the branding of entertainment appears to take precedence over the notion of fidelity where the idea of faithfulness and loyalty is established between concrete extended and abstract core identity and fidelity prompts a dialogue of meaning-making and power play.

After the large-scale success of the movie Brokeback Mountain, Annie Proulx expressed repeatedly that she is not happy with the way her story was treated by the public. Her dismay stems from people’s ignorance of the core theme she explored in both film and short story: the rampant homophobia present in the American West. The aim of this paper is to examine and contextualize the discussion which followed the movie’s success and analyze the way the movie was marketed and then reviewed to reinforce homophobic stereotypes.

Since its publication, F. Scott Fitzgerald’s famous novel The Great Gatsby has been adapted several times, each one offering a distinct representation. The adaptations renew public fascination with Fitzgerald, his fiction, Jazz age fashion and music but also encourage viewers to reconsider their own conceptions of enigmatic Gatsby. But is the popularity of the novel and even its high reputation among literary academics a measure of its greatness? Despite the popularity of 1926, 1949, 1974 and 2013 films, critics maintain that the nuances of the novel are lost in the process of adaptation and even question whether the novel should be represented in another medium paving the way to put an effort of answering why the ‘great’ Gatsby never makes a great movie.

Gallagher, Donat and Carlos Villar Flor. In the Picture. The Facts behind the Fiction in Evelyn Waugh’s “Sword of Honour”. Amsterdam & New York: Rodopi, 2014. p. 81