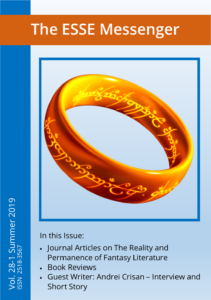 The Reality and Permanence of Fantasy Fiction, p. 5

Reality Uncovered through the Mummy Legend: Bram Stoker’s The Jewel of Seven Stars and Anne Rice’s The Mummy, or Ramses the Damned, by Kübra Baysal, p. 6

A pioneer of the mummy legend, Bram Stoker’s novel The Jewel of Seven Stars (1903) conjures the horror of the mummy through Tera, whose body is brought from Egypt to London as part of archaeological excavation. Picturing the strict struggle between the evil and the good as well as the constant imperial and racial conflict between the west and the east, Stoker’s story sets an example to Anne Rice’s The Mummy, or Ramses the Damned (1989), which revivifies the mummy of Ramses II. Despite drawing certain similarities with Stoker’s horror work, Rice’s romance novel focuses mainly on Ramses’ humane adventures in the-twentieth-century London and Egypt. More significantly, the mummy legend is utilised in these narratives to reflect the fin de siècle pursuits of the British Empire and the androcentric and racist mind-set prevailing throughout the twentieth century through the objectification and stigmatisation of the mummies as part of the east.

The Fantasy Reflection of the Real in  Myke Cole’s Control Point, by Ewa Drab, p. 17

Myke Cole, an author of three fantasy series and an ex-soldier, uses military fantasy as a mode of storytelling in order to refer to real-life conflicts. Both the understanding of how fantasy literature filters the real to expose particular themes or motifs and the explanation of how military fantasy as a specific subgenre can be defined are necessary to be able to delve into the world of Control Point (2012) and outline its mechanics, useful in describing reality with the use of fantasy tropes.

The Quest for Belief, by Fernanda Luísa Feneja, p. 26

Genre issues pervade much criticism of fantasy, the fantastic and science fiction, generating controversy on the blurring boundaries between science fiction and fantasy. The relationship man-machine and the humanisation of man-made artificial bodies epitomise themes of science fiction that evince its intersection with fantasy. This article discusses how “Jenny”, Kurt Vonnegut’s short story in While Mortals Sleep (2011), draws together the concepts of belief and disbelief, related with fantasy, and a classical sci-fi motif ─ artificial creatures. The story’s structure and plot develop out of this conjunction of elements ─ as does the reflection it invites on the essence of humanity and the contemporary meaning of the narrative.

“Other” Readers, Other Worlds, by Sara González Bernárdez, p.39

The belief that fantasy and reality are interdependent and capable of affecting each other has made it possible to argue that fantasy fiction holds the potential to subvert the imagery that surrounds marginalised social groups; a potential that is, however, often truncated by misguided conceptions of what these marginal subjectivities should experience within fiction. This essay aims to explain how the experience of fantasy fiction of otherised subjects (in this case, women, taken as a representative example) fundamentally differs from that of hegemonic subjects, through a revision of the concept of “suspension of disbelief” and Wolfgang Iser’s theory of reception.

Mesmerism and the Sensation of Death in Poe’s “The Facts in the Case of M. Valdemar”, by Justine Shu-Ting Kao,
p. 51

The startling voice of “The Facts in the Case of M. Valdemar” is drawn directly from a mesmeric phthisis patient, presenting a striking portrait of the sensation of death in its deathbed scene. The doctor in the story confronts the reality that man cannot prevent death, although temporary deferment is possible. Furthermore, if the patient represents Virginia, the doctor stands for Poe who stayed within the transition and intended to retrieve/remember ‘the voice’ of Virginia from an unknown realm. Thus, the ambiguous space between life and death serves as an area overlapping between fantasy and reality. What Poe reveals to us is not the exaltation of success with regard to postponing death, but instead a horrible scene resulting from human interference in this natural process.

This paper aims to analyze the complex articulations of the Island-trope in Canadian fantastic fiction. A prevalent trope in Anglophone literature, the Island is rarely perused within the framework of twentieth-century fantastic Canadian literature. Yet in novels such as Erskine Douglas’ A bit of Atlantis (1900), Jack Hodgins’ The Invention of the World (1977) and Graham Petrie’s Seahorse (1980), the (often contrasting) symbolism associated with the island-possibility, marginality, liminality-is not merely an aesthetic or thematic obsession; the Island functions as a fluctuating metafictional landscape, a self-referential artefact, culturally and historically embedded.

. This paper examines the juxtaposition of different sets of languages (natural, mathematical, geometric, hermetic) in Lewis Carroll’s Alice books, arguing that this study can help understand similar mobilizing situations arising from the incorporation of layers of mathematical code over analogic interfaces in digitalization. While Alice’s Adventures in Wonderland initiates an exploration on how analogic reasoning might meet certain conditions of reflexivity and symmetry which are not always necessarily transitive or reducible to the relations of equivalence present in Aristotelian logic and linear causal cognition, its sequel Through the Looking-glass and what Alice found there expands these findings and focuses on hybrid semiotic formats that move beyond analogy and inquire into the relationship between perception and cognition, between the eye and the logos; an inquiry anticipated by the development of optics, Carroll’s (non-)Euclidean pursuits, his interest in photography, as well as the epistemological changes brought about by these new ways of seeing. The underlying argument is that Carroll’s books anticipate experiments in complexity which introduce forms of non-linear (or fuzzy) logic among other techniques (i.e. the use of fractal loops) that would culminate in the black-mirror sites (in reference to Netflix TV series) displayed in our contemporary mobile screens as variations of Carroll’s looking-glass.

As God is Our Witness, by Alexandru Paul Mărgău, p. 98

This article sets out to analyze a book that was written by Otto Weiss during his imprisonment in the Terezin ghetto in 1941, as a birthday present for his wife, Irena. In addition to the text itself, I am analyzing the importance of the drawings made by his daughter during the same time, at the age of 10. In taking these into account, I am looking at how the fantasy of God coming down to Earth in the form of a Jew, Aaron Gottesmann, supplies Otto and his daughter with an escape mechanism out of the horrors of the Holocaust. Having been published in the meantime, the book allows today for a whole people, be it Christian, Jew or Agnostic, to join the fantasy while remaining anchored in one’s own reality, and picture what it would have been like as a Jew and as God to live during the Nazi party’s regime.