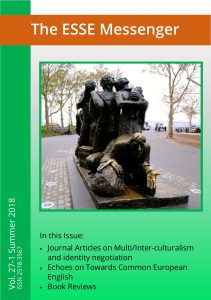 In contemporary democracies, the debate on immigrants and their integration has been salient. In the context of its nation-building project, Scotland is seen to elaborate its own integration model based on civic national identity.

Often likened to Quebec’s interculturalism, Scotland has been frequently seen as an example of civic nationalism, promoting a national identification based on territoriality. Scotland’s identity is based on territorial criteria rather than ethnic sense of belonging to a tribe, making Scottishness more accessible to different ethnicities. The paper attempts to explain and assess the Scottish multicultural model taking into consideration the already complex multinational situation

African American children’s literature has always been marked with the rhetoric of resistance. In response to the racist assumptions about black body, many children’s authors celebrate the beauty of natural Afro hair. This article analyzes bell hooks’s picture book Happy to Be Nappy, in which Afro hair is used as a signifier of black identity and racial pride. It makes reference to previous publications on the topic of black hair and explains the importance of the books in the tradition of African American children’s literature as defined by W.E.B. Du Bois.

Traces of Transnationalism and Multiculturalism in a Literary Context – Alessia Polatti, p. 30

The article takes a cue from the idea that the failure of the current notion of multiculturalism does not rely on a problem of biological “race” but on a conception of space/place which implies that, according to common belief, people should stay in their “own place” (Bauman 2005). The relationship between spatial definitions and identity is at the core of the recent diaspora theories. The aim of the article is to analyse the interrelationships among multiculturalism, identity processes, space, and migration through postcolonial literature: Shoba Narayan’s Return to India, Nadeem Aslam’s Maps for Lost Lovers, and Arinta Srivastava’s Looking for Maya will be used as tools of investigation of these same phenomena.

The main purpose of this essay is to investigate how V.S. Naipaul’s autobiographical novel The Enigma of Arrival describes the ways in which a transcultural, hybrid subjectivity is performed in the form of a series of multiple linguistic acts in which the narrator positions himself within an ever-changing reality. The dynamic pattern through which the protagonist’s subjectivity comes into being will be analysed in the light of the multiple relations with otherness that the novel stages at different levels. Also, the essay deals with issues of self-reflexivity, since The Enigma of Arrival deals with the development Naipaul’s relationship to writing and also with the composition of the novel itself.

There is no sanctioned definition of a global or world language, but it basically refers to a language that is learned and spoken internationally and is characterized not only by the number of its native and second language speakers, but also by its geographical dispersal, and its use in international organizations and in diplomatic relations. As a predominant tool of communication, it avails itself of authority of a very special kind. Within the relation of language and power there is little doubt that it includes an element of domination too. This kind of language domination can be spoken of in terms of cultural imperialism, which formerly occurred in the sense of colonization and political supremacy, now it is less obvious but nonetheless widespread.