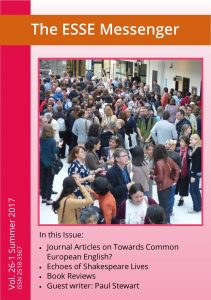 English has become a widespread means of communication between people who do not share the same mother tongue. On the one hand, this practice – which has even been claimed to constitute a distinct variety of English – has posed a challenge to the notion of standard in English in general and more specifically for foreign language learners of English. On the other hand, English is not only used for tourist, academic and business purposes, but also serves as a broker of communication for “newcomers” in European countries, which does not necessarily uphold the image of English as the language of opportunity.

The English language has become an essential tool in today’s world, affecting all areas of society and fields of knowledge. Historical, socioeconomic and sociolinguistic factors account for the extraordinary spread of English and its development. Important questions have been raised, within and beyond the academic sphere, concerning the legitimacy of the dominance of English, its role as a global language and as a lingua franca, and its place in a multicultural world, where multilingualism has increasingly been supported, namely by the European Union.  While all these issues apply to the European context likewise, ascribing a specific identity to the English used in Europe has also gained its opponents and defenders. In this essay, I support the view that the key role of English will not be diminished by current challenges, although it is likely to change while it coexists with multilingualism.

The question of recognizing a new variety of English in Europe has been raised as the nations of Europe have become more politically and economically closer in the last 20 years. Such Euro-English variety that non-native speakers of English coming from European countries develop as their own variety of English has been supported by certain authors and scholars who have gone into the description of English as it appears in various European contexts, and, on the other hand it has been rejected by certain authors due to the close  devotion towards Inner Circle English norms and due to the fact that many ELT materials should have been changed and adapted to reflect more typical Euro-English communication situations. Having that in mind this paper attempts to open up the discussion on the emergence of Euro-English in a non-EU country, Bosnia and Herzegovina. There have been 120 ESP students at the tertiary educational level examined and tested for the acquisition, tolerance and acceptance of Euro-English typicalities. It has been noticed that Euro-English variety does need a special status as it serves communicative purposes as do all other legitimate varieties of English around the globe.

In this review article I discuss some of the common controversies surrounding the idea of Euro-English by weighing out the most frequently upheld positions in the many debates this phenomenon has spurred in recent decades. I leave my own ambivalence fully exposed to the reader as the article is essentially built from a series of notes and reflections that I have developed reporting and deliberating on some of the current research on Euro-English. The text is also interspersed with anecdotal evidence that has inspired and influenced my thinking in this matter.

Cleopatra has always been one of Shakespeare’s most controversial characters. As an ambitious, sexually-aggressive woman from the non-Western world, she seems to embody all of the conflicting and confused attitudes towards gender and race of Elizabethan England. Though some might view her treatment in the play as negative, or even “anti-feminist,” the odd mix of praise and censure that runs throughout seems to belie any definitive reading. Regardless of her author’s intentions, the overall impression that emerges of Cleopatra is a highly-favorable and sympathetic one. She is truly one of his greatest, tragic, and most complicated characters—of either sex.