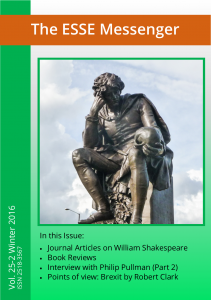 Manuel Barbeito Varela – Europe, like Hamlet; or, Hamlet as a mousetrap

This is an essay on imagination and the politics of reading. Imagining reality is the inventive way of seeing everyday life; reading is performed in this paper by applying the logical framework of a classic – Shakespeare’s Hamlet – to one of the great problems of the contemporary world – immigration – and by responding to this in terms of justice.   Proceeding as a close reading of the first two lines of Hamlet – in a sense, the paper is a footnote to this opening of the play –, the essay implicitly addresses old critical questions like why should we read a classic? or how to cross the frontiers between distant historical periods, how to surmount the historical specificity that separates Shakespeare’s texts and his critics’ writings? The answer given in this essay to these questions is also an invitation to pursue the kind of effort made here to do justice jointly to a text of the past and to a burning issue of the present. A politics of tradition. Rigorous intellectual discipline is not enough; it is also necessary to make an ethico-political decision not to avert one’s eyes from real issues, not to hide behind the screen provided by our world, but to do all we can to change the increasingly negative current social attitudes towards immigrants. The argument is carried out with the tools for thinking provided by thinkers like Jacques Lacan, Jacques Derrida, Alain Badiou, and Slavoj Žižek.

Ever since the establishment of the National Theatre of Sarajevo in 1921, select performances of the Bard’s plays, along with other canonical dramatic texts such as Ibsen’s, Miller’s, Williams’, Ionesco’s, or Beckett’s, have been staged both on the premises of the National Theatre and elsewhere (NPS n. pag.). The Sarajevan audience has always been a privileged one, exposed to and immersed in the dramatic arts. Hamlet, A Mid-summer Night’s Dream, King Lear, Measure for Measure, The Tempest, but also dramatic appropriations and “re-writing” of Shakespeare’s works such as Gamllet, Rosencrantz and Guildenstern Are Dead or The Performance of Hamlet in the Village of Mrduša Donja (NPS n. pag.; Bašović 291), are only some of the dramas that they have enjoyed viewing. However, a 2002 performance of Romeo and Juliet, directed by Haris Pašović and coproduced by the MES International Theatre Festival and Baščaršijske noći festival (Imamović; Imamović and Seksan; Ožegović; “Nedeljni vodič”; Prijović) drew unequivocal attention. It was innovative in many ways: the use of the found-space; the ensemble comprised of established actors/actresses, and young talented people fresh from the Academy; the foregrounding of the (political) feuds; the re-translation of Shakespeare, and foremost, the double ending. This paper aims to consider the manner in which the aforementioned staging of Romeo and Juliet brought in a new reading of Shakespeare within the context of post-war Bosnia and Herzegovina and in particular discuss its (melodramatic) ending.

A comprehensive list of critical material on the screen adaptations of Shakespeare’s works.

Hamlet- the Prince of Denmark has attracted immense attention as one of the most prominent plays of its kind, the tragedy. Taking into consideration the duty of revenge bestowed upon Hamlet by his deceased father, a crucial point arises as to whether such a duty can be merely Hamlet’s fate, or if he can decide not to obey the father’s ghost instead of the familial expectations. This brings about two notions whose validity is still discussed in the modern world even if hundreds of years have passed since the play was written, hence the concepts of fate and free will. Indeed, the dichotomy of fate and free will has been under scrutiny in literary works throughout centuries. In this respect, Shakespeare’s tragedy Hamlet- the Prince of Denmark stands out as an outstanding example of prominent early modern texts involving the interaction of fate and free will.

Deemed a great connoisseur of the human nature whose literary characters exhibit the deepest shadows of the human soul, Shakespeare has largely influenced modern views of certain historical personas. The most famous example is Richard III, perceived as the cruellest English ruler. Inspired by contradictory attitudes of popular fiction writers, Philippa Gregory and Anne O’Brien, toward Shakespeare’s Richard, this paper argues that the Bard cemented the negative image of Richard III based on inconsistent historical sources. Likewise, by comparing Literature and popular fiction, the aim to show that Shakespeare’s play presents a true popular work of fiction of its own time.

The article, from an inter-disciplinary perspective, addresses William Shakespeare’s character Hamlet and his ‘whirlwinds of passion’. The troubles we encounter in Hamlet’s questionings of many of life’s values, purposes, and meanings simultaneously suggest the same patterns of trouble contemporary readers encounter in their social surrounding. In seeking answers to Hamlet’s questions—and our own— as well as in recognizing the possibility of reconstructing, re-thinking, and re-using patterns of this literary text, the article reveals our own present realities and ‘whirlwinds of passion’.

Brigitte Wallinger-Schorn, “So There It Is:” An Exploration of Cultural Hybridity in Contemporary Asian American Poetry (Amsterdam and New York: Rodopi, 2011).

Robert Sheppard, When Bad Times Made for Good Poetry: Episodes in the History of the Poetics of Innovation (Exeter: Shearsman, 2011).

“I don’t think the world was ever disenchanted.  It still is enchanted.” (Part 2) – an Interview with Philip Pullman, by Zsuzsanna Tóth.