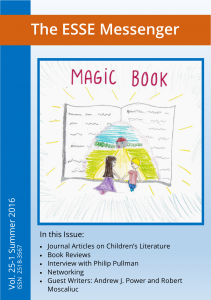 This paper looks at the importance of cultural context when translating food items in children’s literature. Using the two French translations of E. Nesbit’s Five Children and It as a case study, it examines the changes in translating norms between 1906 and 2004 and the key role played by food when translating for children.

Virginie Douglas – When do you stop being a young adult and  start being an adult?

This essay focuses on the subcategory within children’s literature which is closest to “adult” or mainstream literature — young adult (YA) literature —, a thriving branch of the children’s book market. The analysis of the YA novels by British author Kevin Brooks, an author who writes for teens, young adults and adults will show to what extent the writing aimed at young adults endeavours to convey the sense of ambivalence and in-betweenness in themes, setting, style and genre, thus challenging previously-constructed representations of childhood and of children’s books.

The omnipresence of images in the new semiotic landscape necessitates the redesigning of the curriculum so as to cater for the needs of our students. Picture books are an ideal way to engage students in literacy practices without suffocating them under the pressure caused by standardized testing. The present paper deals with a teaching intervention in a Year 6 EFL class in Greece where the students had never dealt with picture books before. The transactional process (Rosenblatt, 1978) between the students and the picture book Olivia Saves the Circus (Falconer, 2001) induced the development of literacy skills, otherwise neglected through the English textbooks.

Bishop Grosseteste University (BGU), located in uphill Lincoln, was founded as an Anglican teacher training college for women in 1862. In 1962 it was named after the medieval Bishop Robert Grosseteste, renowned as a Church reformer and academic. In 2012 the institution, a University College since 2006, was awarded University status and the name changed to Bishop Grosseteste University. Although education and teaching courses still feature prominently, BGU now offers a wide range of subjects and qualifications. This professional article written by Sibylle Erle (Senior Lecturer in English) and Janice Morris (Teaching Resources Librarian) is a case study of the complexity of English Studies in the U.K., showcasing the provision of Children’s Literature at BGU. The article, charting the collaboration between academic and librarian, consists of two parts. Part one is on the Children’s Literature module and part two is on the history and development of BGU’s working collection of literature for children as well as its provision of teaching resources for students studying in the School of Teacher Development.

Evil and power are characterized by intentionality and there seems to be a connection between the two, as evil requires power in order to be enacted, while power when exercised as a means may lead to injustice and evil. The corruption of power creating evil characters can be applied to Bellatrix Lestrange and Dolores Umbridge, the two foremost villainesses of the Harry Potter novels, as well as to Rita Skeeter. Since the world in which the these characters move is a realm immersed in magic, the fact that the two of them are witches is only relevant insofar as it mirrors the witches of fairy tales.

The paper proposes to examine the notion of didacticism in Jacob and Wilhelm Grimm’s Kinder- und Hausmärchen (Children’s and household tales, 1812/15–1857), more specifically didactic fairy tales. The broad discussion of some general issues regarding didactic literature is followed by a study of fairy tales containing superimposed didactic insertions and those in which the didactic agenda is supported by the story structure and content. Fairy tales belonging to ATU 480. The Kind and the Unkind Girls have been selected as an illustration of the latter.

Nursery rhymes are being found increasingly in translational situations, normally in intertextual translations, yet there is no framework or specific study of how they should be translated. This paper aims, on the one hand, to explore the theories related to children’s literature translation that could be applied to nursery rhyme translation, and on the other hand, to identify the particular idiosyncrasies of nursery rhymes that may have an effect on their translation. Several examples are analyzed from different media (comic, children’s book and film) in their translation from English into Spanish and new study possibilities are proposed.

This paper presents the circumstances of the appearance and early reception of Croatian Tales of Long Ago in the English-speaking world, and discusses the endurance of these tales, primarily in the British culture. Their reception in other cultures is briefly described. The book consists of original literary fairy tales related to Slavic mythology and folklore, genuinely created and masterly told by Ivana Brlić-Mažuranić. She wrote a number of pieces for children and young adults, two of which are international children’s classics. Her works have kept their freshness and appeal to the present day.

Marina Pirlimpou – Once a Riddle, Always a Riddle

Through an application of Gilles Deleuze and Félix Guattari’s Anti-Oedipal model, the conflict between Harry Potter and Lord Voldemort in J. K. Rowlings´s Harry Potter series is examined as a juxtaposition of, respectively, the Oedipal camp and the Anti-Oedipal camp as operating on the basis of intertwining desiring and power flows that run through the social body of the Wizarding World and structure it according to either their normalizing or their destructive purposes. The interpellation of Harry/Oedipus ensures the triumph of the Oedipal triangulated oppression, and the Oedipalized beginnings and ending of Voldemort/Anti-Oedipus seal his failure as his revolutionary desire is slowly shut down and consumed by the very same social mechanisms of Oedipal desire, surveillance and control he tries to subvert/command.

The article explores a recurring motif in a number of young adult novels centered around the experiences of immigrant girls and their adjustment to life in a new country. The integration process appears to be linked to the girls’ relationships with boys from the majority culture, making romance a central element of the girls’ development of a new identity and sense of belonging in the new country. We will examine the intersections of gender and integration by focusing on the narrative voices of immigrant girls in three contemporary novels, Sarah Darer Littman’s Life, After (2010), Sarah Crossan’s The Weight of Water (2012), and Terry Farish’s The Good Braider (2012).

Mike Marais. Secretary of the Invisible: The Idea of Hospitality in the Fiction of J.M. Coetzee. Amsterdam & New York: Rodopi, 2009.

“I don’t think the world was ever disenchanted.  It still is enchanted.” – an Interview with Philip Pullman, by Zsuzsanna Tóth.