Sandrine Sorlin, Language and Manipulation in House of Cards: A Pragma-Stylistic Perspective 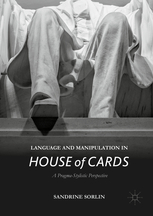 This book is to date the first monograph-length study of the popular American political TV series House of Cards. It proposes an encompassing analysis of the first three seasons from the unusual angles of discourse and dialogue. The study of the stylistic idiosyncrasies of the ruthless main protagonist, Frank Underwood, is completed by a pragmatic and cognitive approach exposing the main characters’ manipulative strategies to win over the other. Taking into account the socio-cultural context and the specificities of the TV medium, the volume focuses on the workings of interaction as well as the impact of the direct address to the viewer. The book critically uses the latest theories in pragmatics and stylistics in its attempt at providing a pragma-rhetorical theory of manipulation.