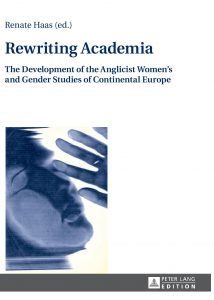 Evidently, the topic was very popular, and it attracted an engaged audience. The introductory part was devoted to foundations. First, Renate Haas (University of Kiel) highlighted Gender Studies as a European discipline.

She based her argument on the recent volume Rewriting Academia: The Development of the Anglicist Women’s and Gender Studies of Continental Europe (Frankfurt: Peter Lang, 2015). In it, 25 experts give broadly contextualised surveys for their countries. Haas pointed out that European cooperation has proved crucial for the full academic recognition of Gender Studies and that a deeper European understanding of Gender Studies presents both a task and a great chance. Next, María Socorro Suárez Lafuente from the University of Oviedo characterised several landmark achievements. That some of their beginnings were modest and elementary may be an encouragement for new endeavours. Chaired by Florence Binard (Université Paris Diderot / Sorbonne Paris Cité), the second part focussed on the concrete practical measures of networking.

A registration form will be posted on this blog for those who wish to join the EGSN. The aim is to become more visible on a national and, more importantly, on a European level.

During the Galway round table, also a call for national correspondents was launched. Their main role will consist of collecting relevant information (written in English) in their respective countries. Participants from Austria, Finland, France, Germany, Greece, Hungary, Ireland, Italy, Romania, and Spain have already volunteered. Candidates from other European countries are welcome! In addition, all EGSN members are invited to send us (Renate, María, Florence) information about CFPs, conferences, publications etc. on English Gender Studies that might interest other members.