John Mullen, Britain in the 1970s: an Annotated Timeline 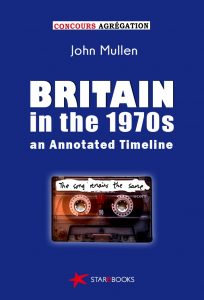 From Callaghan to the Clash, from Grunwick to Rock against Racism, from Edward Heath to Britain’s string of Nobel Science prizes, this annotated timeline of the 1970s recounts the key events and the key statistics of the decade of feminism, the three day week and Monty Python.

Ideal as a reference or revision tool, the book covers well-known and forgotten-but-symbolic features of a period torn between continuing social progress and mass unemployment, a time which produces no consensus among those who study it, but which inspires respect and even awe.

Dozens of links to online resources- BBC videos, articles or sitcoms- make the work even more useful to help get to the truths behind the headlines.

There exists a good selection of books on the 1970s in Britain, and several new publications have been brought out in 2016 : the present author was involved with two of these. This book, an annotated chronology of the UK in the 1970s is intended as a complementary resource, a tool for revision or for reference. For very good reasons, the existing publications are structured thematically (one chapter on trade unions, one chapter on Northern Ireland, etc.). Nevertheless, the disposition of events and declarations on a timeline is also tremendously important in building an understanding of the complex interactions of politics, economics and culture which make up the decade. This is the raison d’être of this work.