Laurent Curelly, An Anatomy of an English Radical Newspaper: The Moderate (1648-9) 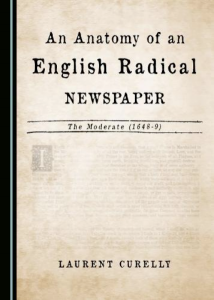 This book explores the content of The Moderate, a radical newspaper of the British Civil Wars published in the pivotal years 1648-9. This newsbook, as newspapers were then known, is commonly associated with the Leveller movement, a radical political group that promoted a democratic form of government. While valuable studies have been published on the history of seventeenth-century English periodicals, as well as on the interaction between these newspapers and print culture at large, very little has been written on individual newspapers. This book fills a void: it provides an in-depth investigation of the news printed in The Moderate, with reference to other newspapers and to the larger historical context, and captures the essence of this periodical, seen both as a political publication and a commercial product. This book will be of interest to early-modern historians and literary scholars.

The Cambridge Scholars Publishing website makes it possible to view the first thirty pages of the book:
http://www.cambridgescholars.com/an-anatomy-of-an-english-radical-newspaper