Sneharika Roy, The Postcolonial Epic: From Melville to Walcott and Ghosh 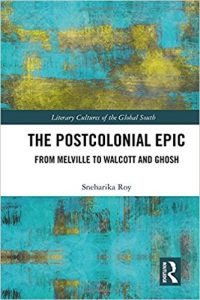 Bridging classical and contemporary scholarship, The Postcolonial Epic places the epic, a form traditionally marginalised in postcolonial criticism, at the heart of the post-imperial construction of the imagined community. It introduces two major comparative concepts—political epic and postcolonial epic—in order to re-evaluate the post-Hegelian conception of epic as a discursively stable expression of the national totality. The political epics of Valmiki, Virgil, and their successors are recast as more unsettled entities, in which an avowed national politics promoting a culture’s “pure” origins coexists uneasily with a disavowed poetics of intertextual borrowing from “other” cultures. This paradox allows the book’s chiasmatic argument to come into view: while political epic employs a hybrid poetics of migration to express a monocultural politics of nation (a contradiction it must disavow), postcolonial epic allows the genre to come full circle. It deploys a migrating poetics of intertextuality to articulate a transnational politics of migration (a complementary homology it openly advertises).

Prefigured by Herman Melville’s Moby Dick and exemplified by the works of Derek Walcott and Amitav Ghosh, postcolonial epic compounds the tensions already present in political epic and makes the tradition more amenable to contemporary explorations of the profoundly disruptive nature of colonialism. The Postcolonial Epic foregrounds key postcolonial developments in the genre, including a shift from politics to political economy, subaltern reconfigurations of capitalist and imperial temporalities, and the poststructuralist preoccupation with language and representation.

The table of contents

Introduction: from classical to postcolonial epic

Sneharika Roy is Assistant Professor of Comparative Literature and English at The American University of Paris. She is a contributor to MLA volume on Approaches to Teaching the Works of Amitav Ghosh and to the encyclopedic project DELI (Dictionnaire Encyclopédique des Littératures de l’Inde).