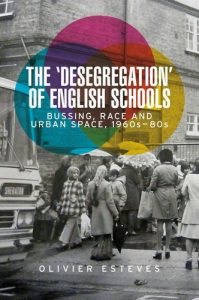 Dispersal, or ‘bussing’, was introduced in England in the early-1960s after white parents expressed concerns that the sudden influx of non-Anglophone South Asian children was holding back their own children’s education. It consisted in sending busloads of mostly Asian children to predominantly white suburban schools in an effort to ‘spread the burden’ and to promote linguistic and cultural integration. Although seemingly well-intentioned, dispersal proved a failure: it was based on racial identity rather than linguistic deficiency and ultimately led to an increase in segregation, as bussed pupils were daily confronted with racial bullying in dispersal schools. This is the first ever book on English bussing, based on an in-depth study of local and national archives, alongside interviews with formerly-bussed pupils decades later.

Olivier Esteves is Professor of British Studies at the University of Lille, France.

Introduction
1 “To allay people’s fears on numbers”: the introduction of dispersal in Southall
2 Improvisation in high places? Setting the national framework for bussing
3 “Before it gets out of hand”: the introduction of dispersal in Bradford
4 Reluctant cities: how London and Birmingham said no to dispersal
5 Dispersing in diverse places: how the other L.E.A.s fared
6 Taking the bullying by the horns: the emergence of resistance against bussing
7 Babylon by bus: the quotidian experience of being bussed
Conclusion
Index