Silke Stroh, Gaelic Scotland in the Colonial Imagination: Anglophone Writing from 1600 to 1900 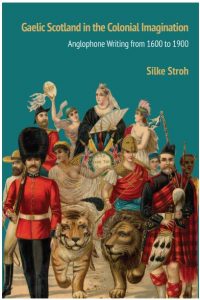 Can Scotland be considered an English colony? Is its experience and literature comparable to that of overseas postcolonial countries? Or are such comparisons no more than patriotic victimology to mask Scottish complicity in the British Empire and justify nationalism? These questions have been heatedly debated in recent years, especially in the run-up to the 2014 referendum on independence, and remain topical amid continuing campaigns for more autonomy and calls for a post-Brexit “indyref2.”  However, postcolonialism cannot be reduced to politics: cultural concerns are equally important. Focusing on the first centuries of the British Unions, Gaelic Scotland in the Colonial Imagination also offers a general introduction to the emerging field of postcolonial Scottish studies, assessing both its potential and limitations in order to promote further interdisciplinary dialogue. Accessible to readers from various backgrounds, the book combines overviews of theoretical, social, and cultural contexts with detailed case studies of literary and nonliterary texts. The main focus is on internal divisions between the anglophone Lowlands and traditionally Gaelic Highlands. Central to the ‘internal colonialism’ debate, these divisions also play a crucial role in Scottish–English relations. This study shows how the image of Scotland’s Gaelic margins changed under the influence of two simultaneous developments: the emergence of the modern nation state and the rise of overseas colonialism. Both sparked intense debates over ethnic hierarchies, progress and development, cultural intermixture, exploitation and resistance. Examples are drawn from novels, travel writing, poetry, political and administrative documents, writings by missionaries and educators, historiography, journalism, and anthropology.

Chapter 1: The Modern Nation- State and Its Others: Civilizing Missions at Home and Abroad, ca. 1600 to 1800

Chapter 3: The Reemergence of the Primitive Other? Noble Savagery and the Romantic Age

Silke Stroh is a lecturer in anglophone literature and cultural studies at the University of Muenster, Germany.