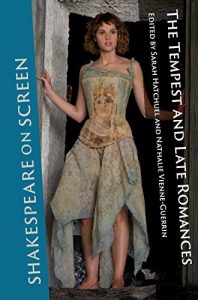 The second volume in the re-launched series Shakespeare on Screen is devoted to The Tempest and Shakespeare’s late romances, offering up-to-date coverage of recent screen versions as well as new critical reviews of older, canonical films. An international cast of authors explores not only productions from the USA and the UK, but also translations, adaptations and appropriations from Poland, Italy and France. Spanning a wide chronological range, from the first cinematic interpretation of Cymbeline in 1913 to The Royal Ballet’s live broadcast of The Winter’s Tale in 2014, the volume provides an extensive treatment of the plays’ resonance for contemporary audiences. Supported by a film-bibliography, numerous illustrations and free online resources, the book will be an invaluable resource for students, scholars and teachers of film studies and Shakespeare studies.

Sarah Hatchuel is Professor of English Literature and Film and Head of the Groupe de Recherche Identités et Cultures (GRIC) at the University of Le Havre, as well as President of the Société Française Shakespeare. She has written extensively on adaptations of Shakespeare’s plays, including Shakespeare and the Cleopatra/Caesar Intertext: Sequel, Conflation, Remake (2011), Shakespeare, from Stage to Screen (Cambridge, 2004), and A Companion to the Shakespearean Films of Kenneth Branagh (2000), and has also written on television series, including Lost: Fiction vitale (2013) and Rêves et séries américaines: la fabrique d’autres mondes (2015). She is Co-editor-in-chief of the online journal TV/Series.

Nathalie Vienne-Guerrin is Professor in Shakespeare studies at Université Paul Valéry, Montpellier and Director of the Institut de Recherche sur la Renaissance, l’âge Classique et les Lumières. She is co-editor-in-chief of the international journal Cahiers Élisabéthains and Co-director (with Patricia Dorval) of the Shakespeare on Screen in Francophonia Database (http://shakscreen.org). She has published The Unruly Tongue in Early Modern England, Three Treatises (2012) and is the author of Shakespeare’s Insults: A Pragmatic Dictionary (2016). She is Co-editor of the online journal Arrêt sur Scène/Scene Focus.