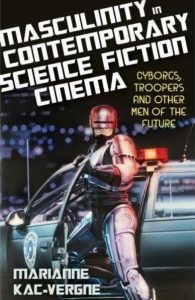 If science fiction stages the battle between humans and non-humans, whether alien or machine, who is elected to fight for us? In the classics of science fiction cinema, humanity is nearly always represented by a male, and until recently, a white male. Spanning landmark American films from Blade Runner to Avatar, this major new study offers the first ever analysis of masculinity in science fiction cinema. It uncovers the evolution of masculine heroes from the 1980s until the present day, and the roles played by their feminine counterparts. Considering gender alongside racial and class politics, Masculinity in Contemporary Science Fiction Cinema also situates filmic examples within the broader culture. It is indispensable for understanding science fiction and its role in contemporary cultural politics.

Marianne Kac-Vergne is Lecturer at the Universite de Picardie Jules Verne in Amiens, France, where she teaches courses in American cultural history at graduate and undergraduate levels. Her research focuses on gender and genre in American cinema, and she has published and presented on masculinity and femininity in science fiction, romantic comedy and western films.

‘A must read about gender politics in popular culture, this is a revealing and original historical study about constructed male identities in the flourishing genre of science fiction. Marianne Kac-Vergne eloquently coins key developments in the depiction of (hyper)masculinity in Hollywood blockbusters and traces the 1980s heroes with bulging muscles and hard bodies to the twenty-first century- sci-fi-species equipped with clever minds and a heart. The only staple: women stay on the sidelines while hegemonic masculinity rules. In the current political climate Kac-Vergne teaches us invaluable new insights to engage with the ideas of race and gender in mainstream film’ – Karen A. Ritzenhoff, Professor, Department of Communication, Central Connecticut State University

‘Marianne Kac-Vergne’s Masculinity in Contemporary Science Fiction Cinema: Cyborgs, Troopers and Other Men of the Future is a brilliant analysis of contemporary science-fiction cinema. It will appeal to academics and students in film studies, gender studies, and cultural studies alike: its smart contextualizations, subtle commentary of intertexts and astute close readings, combined with strong intersectional analyses of the masculinity in these well-known films will prompt re-viewing in another light. Broader audiences will find this is a highly enjoyable read, with a dose of wit and wry humor. This is truly a must-read for anyone who watches, studies, or indeed, makes science fiction films today’. – Monica Michlin, Professor of Contemporary American Studies, Université Paul Valéry Montpellier