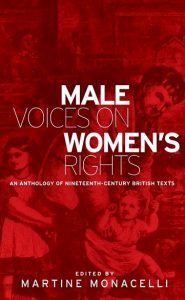 Male voices on women’s rights is a timely complement to the studies undertaken in recent years on men’s roles in the history of feminism.This unique collection of seminal, little-known or forgotten writings, spanning from 1809 to 1913, will help the revision of many common assumptions and misconceptions regarding male attitudes to sex equality, and give some insight into the tensions provoked by shifting patterns of masculinity and re-definitions of femininity. The documents, drawn from a wide range of sources, throw a light on the role played by the radical tradition, liberal culture, religious dissent and economic criticism in the development of women’s politics in nineteenthcentury Britain.
The collection includes a substantial historical introduction and a short contextualising essay before each excerpt, making it an accessible resource for students and teachers alike.

Martine Monacelli is Professor Emeritus at the University of Nice Sophia-Antipolis, France.