Jane Austen and William Shakespeare: A Love Affair in Literature, Film and Performance, 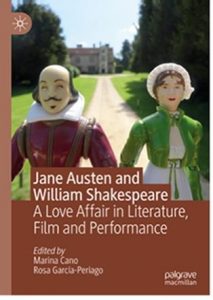 This volume explores the multiple connections between the two most canonical authors in English, Jane Austen and William Shakespeare. The collection reflects on the historical, literary, critical and filmic links between the authors and their fates. Considering the implications of the popular cult of Austen and Shakespeare, the essays are interdisciplinary and comparative: ranging from Austen’s and Shakespeare’s biographies to their presence in the modern vampire saga Twilight, passing by Shakespearean echoes in Austen’s novels and the authors’ afterlives on the improv stage, in wartime cinema, modern biopics and crime fiction. The volume concludes with an account of the Exhibition “Will & Jane” at the Folger Shakespeare Library, which literally brought the two authors together in the autumn of 2016. Collectively, the essays mark and celebrate what we have called the long-standing “love affair” between William Shakespeare and Jane Austen—over 200 years and counting.

Chapter 1: Introduction: Jane and Will, the Love Story,
Marina Cano and Rosa García-Periago

Chapter 6: Is it ‘a marriage of true minds’? Balanced Reading in Northanger Abbey and Persuasion,
Lynda Hall

Chapter 7: ‘As sure as I have a thought or a soul’: The Protestant Heroine in Shakespeare and Austen,
Claire McEachern

Chapter 8: Tyrants, Lovers, and Comedy in the Green Worlds of Mansfield Park and A Midsummer Night’s Dream,
Inger S. B. Brodey

Chapter 13: Screening Will and Jane: Sexuality and the Gendered Author in Shakespeare and Austen Biopics,
Lisa Starks

Chapter 15: In the Pursuit of Love: Twilight, Jane and Will,
Heta Pyrhönen

More about the volume