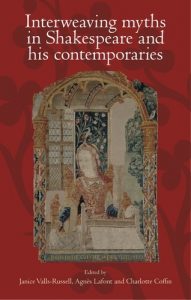 DESCRIPTION: This volume proposes new insights into the uses of classical mythology by Shakespeare and his contemporaries, focusing on interweaving processes in early modern appropriations of myth. Its 11 essays show how early modern writing intertwines diverse myths and plays with variant versions of individual myths that derive from multiple classical sources, as well as medieval, Tudor and early modern retellings and translations. Works discussed include poems and plays by William Shakespeare, Christopher Marlowe and others. Essays concentrate on specific plays including The Merchant of Venice and Dido, Queen of Carthage, tracing interactions between myths, chronicles, the Bible and contemporary genres. Mythological figures are considered to demonstrate how the weaving together of sources deconstructs gendered representations. New meanings emerge from these readings, which open up methodological perspectives on multi-textuality, artistic appropriation and cultural hybridity/