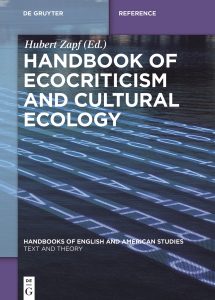 Ecocriticism has emerged as one of the most fascinating and rapidly growing fields of recent literary and cultural studies. From its regional origins in late-twentieth-century Anglo-American academia, it has become a worldwide phenomenon, which involves a decidedly transdisciplinary and transnational paradigm that promises to return a new sense of relevance to research and teaching in the humanities. A distinctive feature of the present handbook in comparison with other survey volumes is the combination of ecocriticism with cultural ecology, reflecting an emphasis on the cultural transformation of ecological processes and on the crucial role of literature, art, and other forms of cultural creativity for the evolution of societies towards sustainable futures. In state-of-the-art contributions by leading international scholars in the field, this handbook maps some of the most important developments in contemporary ecocritical thought. It introduces key theoretical concepts, issues, and directions of ecocriticism and cultural ecology and demonstrates their relevance for the analysis of texts and other cultural phenomena.