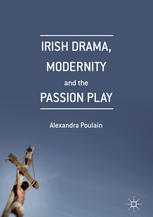 This book discusses Irish Passion plays (plays that rewrite or parody the story of the Passion of Christ) in modern Irish drama from the Irish Literary Revival to the present day. It offers innovative readings of such canonical plays as J. M. Synge’s The Playboy of the Western World, W. B. Yeats’s Calvary, Brendan Behan’s The Hostage, Samuel Beckett’s Endgame, Brian Friel’s Faith Healer and Tom Murphy’s Bailegangaire, as well as of less well-known plays by Padraic Pearse, Lady Gregory, G. B. Shaw, Seán O’Casey, Denis Johnston, Samuel Beckett and David Lloyd. Challenging revisionist readings of the rhetoric of “blood sacrifice” and martyrdom in the Irish Republican tradition, it argues that the Passion play is a powerful political genre which centres on the staged death of the—usually male—protagonist, and makes visible the normally invisible violence perpetrated both by colonial power and by the postcolonial state in the name of modernity.

The story of the Passion of Christ, and its climactic moment of crucifixion, is intrinsically theatrical: the Cross is not just an instrument of torture, but a vertical stage on which the tortured body is displayed. In the Christian narrative, the logic of crucifixion, originally intended as a display of Roman imperial power, is reversed to the benefit of the victim. By theatricalising his willing sacrifice, the suffering body on the cross becomes the subject of his own dramaturgy, unifying the community of Christians around his martyred body. The Passion play, which theatricalises the performance of a spectacular process, is thus always metatheatrical; it not only directs our gaze to the suffering body on the cross but also invites us to recognise that we are engaging in the ambiguous act of watching. Inspired by theatre and performance studies, postcolonial theory, queer theory and by Slavoj Žižek’s conceptualising of “systemic violence,” this book argues that the function of this theatrical form is to make visible the violence directed upon the martyred body—to make visible, in other words, a violence which, in the context of modernity, is never willingly displayed in real life but on the contrary, rendered invisible by hegemonic discourses.