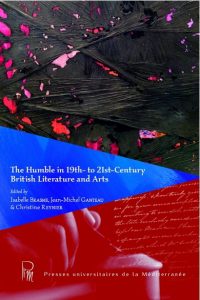 Description: Through its take on ‘the humble’, this volume attempts to reveal the depth and philosophical relevance of literature, its ethical and political dimension as well as its connection to life. Because it can be associated with social class, religion, psychology or ethics, the notion of ‘the humble’ lends itself to diverse types of studies. The papers collected in this volume argue that in the course of the 19th, 20th and 21st centuries, artists and writers have revisited the term ‘humble’ and, far from treating it as a simple motif, have raised it to the status of an aesthetic category. This category can first foster a better understanding of fiction, poetry, painting, and their representation of precarious lives through various genres and modes. It may also draw attention to neglected or depreciated humble novels or art forms that developed from the Victorian to the contemporary period, through the Edwardian and the modernist eras. Finally, it helps revise assumptions about the literature and art of the period and signals to a poetics of the humble. The works of art examined here explore the humble as a possible capacity and ethical force, a way of being and acting.