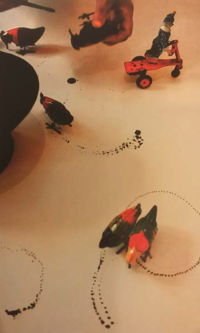 As a contribution to numerous theoretical and historical discussions on intermediality by   ISIS and its members, this conference aims to study the intermedial work of art through its different stages, from conception to reception, as well as the related matters of analysis and preservation.

With the introduction of new technologies and new media in the past fifty years, two main tendencies have characterized artistic creation. The first tendency explores the exchanges between artistic domains through the interaction of sound, image, and gesture, which can lead to a true osmosis between different types of perception. The second tendency leans toward the abolition of the distinction of “art” and “non-art”, through the aestheticization and dramatization of other cultural fields (mass-media, sports, politics…).

Thus, forms of art express themselves through the use of intermedial and intersensory phe- nomena, through multidisciplinarity and indisciplinarity (that is, the transgression of limits or boundaries between artistic domains), but also between different types of perception or even different social environments. In the face of such a plurality of approaches outside of clearly defined disciplines and aesthetics, it is necessary to develop a transverse approach to the analysis of interdisciplinary artistic practice and theory, as well as to the critical discourse that accompanies them. It is also necessary to define or develop concepts corresponding to such situations: the decline of the object, crises of languages, syntheses of arts and synaes- thesia, sensorial conjunctions, pluri-artistic environments, active participation, etc. In parallel to all that, it is also necessary to question the different ways of thinking about “non-art” and the significance of the aestheticization of culture.

New notions such as trans– and hyper-, media– or immedia manifest themselves in interme- dial work. The creation of the latter is also at the heart of digital computer creation, which has considerably enlarged original avant-garde conceptions, thus creating an epistemological change and the necessity of a deeper thinking—not theoretical, but anchored in the work itself, its existence, its ways of being in its different stages from conception, performance, and reception. On top of the transdisciplinary and interdisciplinary methods used, the “in- disciplinary” method, in the sense that Huys and Vernant give to the term (2012)—outside of conventional artistic genres, associated to the creators that voluntarily operate outside of any system—could also be an important path of investigation.

This leads to open questions which should be articulated with case studies in intermedial  art. What methodological tools would be necessary to conceive, actually create, and com- prehend such a particular artistic production as an intermedial work? What would be the de- fining characteristics of such a work of art and its practical realisation? What are its creative dynamics, and how do they differ from non-intermedial art? What are the specific problems of its conception, realisation, and performance? How can its different modes of reception be evaluated? What would be the proper analysis tools or the relevant taxonomies? What terminologies would be best suited to investigate such works? Rather than the traditional artistic conceptual vocabulary—perhaps too medium- or disciplinary-specific—this confe- rence could be a moment to discuss terminologies of the common multi-artistic processes involved. Last, since archive centres, libraries, and museums encounter numerous difficul- ties when confronted with such works (at worst, intermedial works of art are badly archived, badly presented, and even excluded from archival collections), this conference aims to ex- plore remedies to those difficulties.

This conference is organized around the following five themes:

The time for presentations is limited to maximum 20 minutes, followed by a 10-minute debate.
Conference fee (which includes participation, conference buffet and banquet): 80 EUR, special fee (students, unemployed…): 50 EUR.
Please send an abstract (max. 250 words) and a short bio (max. 50 words) in a PDF attachment to: isis.intermedia.colloque20@gmail.com
Proposals should include your name, university affiliation (if applicable), academic status, and the title of your paper. Papers should not exceed 20 minutes.
The deadline for abstract submissions has been extended to 1st April 2020. Notification of acceptance will be communicated on 1st July 2020.

A prominent tendency in English literary criticism during the twentieth century, among others, has been to trace the influence of Anglo-American literature on the literary production of other traditions and languages. This dominance, built upon and ensured by the colonial empire of Britain up until WWII, and by the socioeconomic sway of the United States since the post-war period, has decelerated in the panorama of decolonization and the institution of the global market.
This trend seems to have been balanced in the cultural production of the last decades of the millennium, in which the influence of the literatures of other traditions over Anglo-American literature is gradually blossoming, becoming widely and openly acknowledged not only by critics but by the authors themselves. May this be the case, for instance, of Paul Auster who in an unpublished interview with Chris Pace in 1993 stressed his dislike for Jorge Luis Borgesone of the usual suspects in Auster’s intertextsyet who would recommend the works of the Argentinian decades later in his novel 4 3 2 1 (2017)? After all, as Borges voiced in one of his stories, “That a present-day book should derive from an ancient one is clearly honorable: especially since no one (as Dr. Johnson says) likes to be indebted to his contemporaries.” (27)
To study the reverence that Anglo-American authors hold for their foreign peers is certainly not new since allusions to the masters like Dante, Cervantes or Flaubert have been a staple in the canon. As Eliot asserted in “Tradition and the Individual Talent” (1919), there can be established a continuity between the work of any given author and that of his contemporaries, a interconnectivity that extends to all texts produced in the nation, as well as to the “whole of the literature of Europe” (14). In that regard, we see efforts in literary criticism like those of Paget Toynbee and Oscar Kuhns who exposed the Dantean germ in the lines of many figures from England’s poetic pantheon; or The Western Canon (1994) by Harold Bloom, in whose multicultural and multilingual index—albeit with a male Anglo-centric predominance—many authors could have found hypotexts for their stories.
It is the objective of this conference to invite scholars whose research has established connections of relationship, influence or rewriting of literature from other countries on contemporary Anglo-American literary texts. This endeavour finds support in Peter Boxall’s study Twenty-First-Century Fiction: A Critical Introduction (2013), in which its author concludes that “The Anglo-American contemporary novel is shaped by its ongoing dialogue with writers from other nations, writing often in languages other than English.” (6) Boxall presents this cultural exchange as a result of the transformation of the concept of national and postnational identity that is taken place in our globalized reality, giving rise to a “global consciousness” (168). Even if we remain skeptic of this totalizing development, it is clear that the hybrid identities constituted in the aftermath of decolonization and diaspora are nurtured in multiple traditions. These, within the context of postcolonial literature, have been articulated in response to the centres of political and cultural authority since, as Bill Ashcroft neatly phrased it, “the empire needs to write back” (6).
This Conference attempts to create a space for academics of different areas, nationalities and cultures where contemporary Anglo-American literature can be approached from the angle of a comparative analysis between different traditions. Although the focus is on contemporary works and authors, submissions that study fiction or poetry from the first half of the twentieth century are also welcome. Possible topics, or areas of inquiry, may include, but not exclusively:

The Conference will be held in English and Spanish.

Proposals must include: Paper title, contact information, abstract (250 words including 4-6 keywords), bioprofile (150 words).
Proposals will undergo a peer-reviewing process in which relevance, quality, methodology and adaptation to the conference’s thematic lines will be taken into consideration.
Proposals must be sent to: visionescomplementarias@gmail.com
Key dates: