Theme: The book-to-film debate in the age of visual commodities 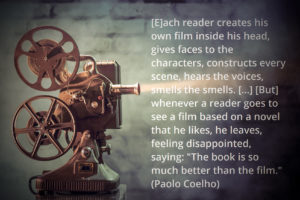 ‘Did you read the novel?’ – ‘No, but I saw the film.’ This is a dialogue that often takes place today. Besides being common, this short conversation is also very revealing about the relation between the printed text and its visual representation as a film or TV series. And, obviously, it couldn’t be otherwise in a world dominated by TV sets, computers, tablets and smart phones with video facilities incorporated, and by video games, rock videos, home cinema, and many other appliances that reproduce images. More than that, the new commercialism could not but take advantage of such a reality and turn everything into commodities and try to extract profit from them. Novels about Harry Potter or Games of Thrones would probably not have achieved such rocketing success if they hadn’t subsequently had their visual adaptations.  J.R.R. Tolkien might still be resting on dusty library shelves surrounded by his Middle-earth if he hadn’t been (re)discovered by film makers and adapted for the silver screen.

Today’s reality is that every day we have to face a flood of adaptations, not only in the domain of cinema and television but also in that of virtual reality, thematic parks, clothes, mugs, pens, and household and furniture objects, an impressing array of accessories, etc. We live in a world where everything is adaptable and, in fact, today we become more and more aware of the practice of watching adaptations. Paraphrasing Linda Hutcheon with her fundamental A Theory of Adaptation (Routledge, 2006) — quoted extensively in this Rationale — we can say that anyone who has ever experienced an adaptation (and who hasn’t?) has his or her own theory of what an adaptation means, whether voluntarily or involuntarily.

Watching book adaptations tends to replace the reading of novels, or, on the contrary, to accelerate the selling of the books, when the viewing precedes the reading experience, because the watchers want to compare the adapted text with the film. The responsibility of producing and receiving an adaptation of any kind becomes even more noticeable in the case of novels that are part of the literary canon.

Though films may have their limitations, being unable to dig into the depths of psychology or emotional consciousness, or to render the nuances of voice and tone in spite of good acting on the part of the performers, if understood as cultural translation, the process of adaptation becomes a distinctive, individual work of art. Each adaptation is the product of a cultural context through which various worldviews are expressed, and therefore the adaptation can be contradictory once it has been taken out of its own cultural background. Its existence is not only conditioned by the cultural context that created it but it stays alive within such a context.

What film makers have to decide when they start out on a project of adaptation is not only what to adapt but also how, namely whether their aim is to merely recreate visually the story of the book or to depart from it and offer their own creative vision of that particular story. This double nature of any adaptation is what Linda Hutcheon refers to when she states in A Theory of Adaptation (6) that ‘[a]n adaptation’s double nature does not mean, however, that proximity or fidelity to the adapted text should be the criterion of judgment or the focus of analysis. For a long time, “fidelity criticism,” as it came to be known, was the critical orthodoxy in adaptation studies, especially when dealing with canonical works such as those of Pushkin or Dante. Today that dominance has been challenged from a variety of perspectives […] and with a range of results. And, […], when a film becomes a financial or critical success, the question of its faithfulness is given hardly any thought.’

But, for Hutcheon, what is of further interest when adapting a novel is not so much the act of deciding between fidelity or creativity as the fact that ‘the morally loaded discourse of fidelity is based on the implied assumption that adapters aim simply to reproduce the adapted text […]. Adaptation is repetition, but repetition without replication.’ (7). The result is what she sees as the urge to consume and erase the memory of the adapted text or to call it into question and problematize it. This is the case when the dictionary meaning of ‘adaptation’ as a process of adjusting, altering or making suitable becomes almost literal.

Starting from this theme and context, the December 2019 issue of the ESSE Messenger invites contributions concerned with what Hutcheon suggests as ‘distinct but interrelated perspectives’ (8) of a contemporary process of adaptation: