The ESSE Book Awards for 2020 were announced on 31st August 2020 in a ceremony on video. The prizes were given by the ESSE President, Professor Andreas H. Jucker.

CULTURAL AND AREA STUDIES IN ENGLISH

Besides a much needed in-depth investigation into the cultural history of the participation of the 1.5 million soldiers from what was then conceptualized as India in WWI  from their own point of view, adding  and contextualizing a recuperative and representational dimension to their experiences, shaped by  colonial  demands and imperatives, Santanu Das’ book is particularly innovative as its research is grounded on  texts that are not usually seen as part of the traditional historical archive and tend to be either neglected or considered as unreliable testimonies, innovating therefore the very concept of archive. The book also succeeds in displaying an excellent look at the deepest textures of the colonial past beyond familiar socio-historical and cultural processes engaging in an experiential and dialogical approach towards the voices and experiences of a vast array of people from the colonial state and society to the Indian sepoys and their families whose multiple histories intersect at a particular “turning point in the   history of cultural encounter and entanglement”. 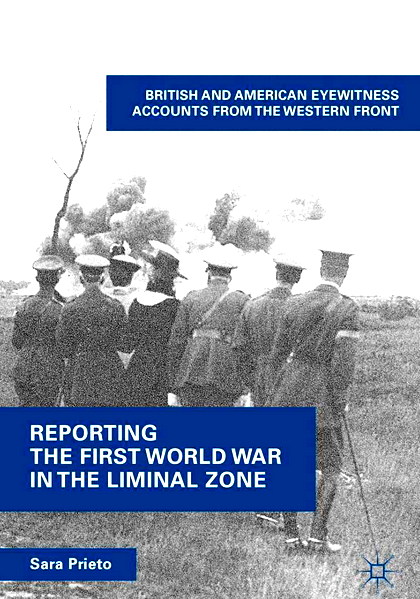 Sara Prieto’s Reporting the First World War in the Liminal Zone: British and American Eyewitness Accounts from the Western Front examines on how the First World War was portrayed in a series of works of literary journalism, written by both male and female authors from both sides of the Atlantic, who visited the Western Front from 1914 to 1918. The originality of the book lies in the fact that it adopts an anthropological perspective, focusing on the liminality (from a generic, time-space, and physical perspective) of both the texts under consideration and the authors’ war experience, and laying emphasis on the three stages of the rites of passage—separation, liminality, and incorporation. Moreover, the book adds to the WWI scholarship by highlighting documents that have been traditionally ignored, such as those by women or men who were not in uniform. Overall, this is a well-informed and convincingly written study: its scope and methodology are well defined and justified from the beginning and discussed in relation with the existing scholarship; its material is convincingly organized into six chapters; and its scholarly tone and argument does not impair its accessible style, thus making it attractive to larger audiences.

Katarzyna Paszkiewicz ’s book on Genre, Authorship and Contemporary Women Filmmakers is a meticulously researched and detailed analysis of women’s cinema, a study field that so far has hardly received booklength attention by film and cultural critics. The writer compellingly explores the strategies of women auteurs who create genre films that deviate from what are stereotypically defined as “women’s films”. Paszkiewicz contextualizes these films in a wide array of aesthetic, political, theoretical and commercial issues and displays how a dialogical and interactive relationship is also possible between feminist film scholars and women filmmakers.

The book focuses on lexical aspects of varieties of English and the creation of neological forms. The author deals with the topic both from a theoretical and empirical viewpoint. She provides the reader with very clearly defined aims and focus of her research, and continues with an extensive overview of the studies related to World Englishes, word formation processes and neologisms. The second part of the book is empirical and investigates 8 varieties of English using established corpora, such as ICE (International Corpus of English) and GloWbE (Corpus of Web-based English), as well as dictionaries (for example, Dictionary of West African English, Dictionary of Jamaican English, etc.). By triangulating (or, in the author’s terms, “quadrangulating”) qualitative and, to a lesser extent, quantitative research, the author manages to provide a viable analysis framework, and the results acquire generalising force. The Conclusions highlight the functional perspective underpinning the book, in conjunction with the descriptive one. The author also suggests new directions of research to strengthen the wide applicability of the proposed framework. The book is a valuable text for all those who are interested in the development of World Englishes, on the one hand, as well as those who are interested in the creation of neologisms. 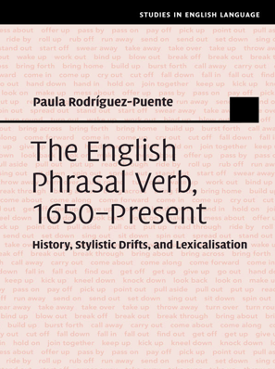 The book focuses on the historical development of phrasal verbs in Modern English (from 1650 to today) and offers a quantative and qualitative corpus analysis of English phrasal verbs. The study is based on 12,000 examples extracted from three main electronic corpora, and six additional ones. The corpora consisted of ten different genres: drama, fiction, journals, diaries, letters, medicine, news, science, sermons and trial proceedings. The author carried out an in-depth investigation not only at the morpho-syntactic and semantic levels, but also at the discourse and stylistic ones. The author’s contribution to the topic is a new, more comprehensive definition of this linguistic category, which does not only refer to the morpho-syntactic and semantic features, but also reflects the synchronic and diachronic perspectives. Additional cross-genre analysis provided relevant results as to variation in the historical development of phrasal verbs in ten different text types. The author provided evidence that phrasal verbs significantly distinguish spoken from written, as well as informal from formal registers. The inclusion of phrasal verbs in a text also depends on the subject matter and idiosyncrasies of the writer. This innovative and comprehensive approach is a valuable contribution to the diachronic, as well as synchronic study of English phrasal verbs.

The book is a valuable addition to the currently very popular topic of world Englishes. Its merit is that it focuses on the issue of topicalization in four different varieties of Asian English: Indian English, Singapore English, Hong Kong English and Philippine English. The book has a clear structure, well-established terminological and theoretical framework, well-defined research questions, and uses corpus-based methodology. The author takes the reader on a journey starting with theoretical aspects of topicalization, moving on to topic-prominence in Asian contact languages, and finishing with forms, functions and frequencies of topicalization in the International Corpus of English (ICE). Following an in-depth empirical analysis of the four varieties of Asian English, the author reaches important conclusions, which provide answers to the research questions. An important finding is that there exists a creativity in the use of topicalization in the researched corpus, which calls for further research in the other Outer Circle Englishes.

The book presents a new history of reading by re-examining the relationship between voices and texts in the context of the English Renaissance. It starts with the premise that “the voice carries meaning for textual scholars, although we have learned not to listen.” One of its aims therefore is to encourage us “to listen” and thus recover voice from textual sources. Richards considers the Renaissance a good starting point for such an intellectual undertaking not only because of the importance of rhetoric during that period but also because older reading habits were being changed by printed books. Rather than merely diagnosing the “silencing” of the written word in the new conditions, she explores voice-training in the Renaissance schoolroom, and this enables her to re-configure the relationship between speech, writing, and print. Richards convincingly argues that “script and print depend on the physical voice for their meaning” and that “the physical voice remained the pre-eminent technology of communication even in the age of print.” By way of illustration she provides “voice- or performance-aware readings” of texts by important Tudor authors. Significantly, she concentrates on prose texts rather than on poetic or dramatic works.

Overall, this is a highly original book showing deep and extensive scholarship. There is no doubt that it will attract specialized readers such as scholars of the English Renaissance, while also being of interest to a wider audience of specialists in literary studies. The book is well-written and a pleasure to read.

Roy, Sneharika. The Postcolonial Epic: From Melville to Walcott and Ghosh. Routledge, 2018.

Published in the series Literary Cultures of the Global South, Sneharika Roy’s monograph is a model combination of generic-rhetorical and at the same time political readings, with compelling and confident analyses that apply theory to texts in an innovative way. Regarding Melville’s Moby Dick as both a foundling and founding text in terms of rewriting the epic, Roy’s main focus is on Derek Walcott Omeros and on Amitav Ghosh’s Ibis trilogy. The result of her exploration is an innovative paradigm that can be seen as an intervention into the study of the epic inasmuch as it takes account of the tension between the epic as a genre and the postcolonial condition in terms of the presence and absence of territory, ancestral culture, and history. The generic-discursive approach combined with postcolonial theory also exposes humour and irony as modes of resistance and dissidence.

Ambitious in its scope, the monograph is a well-researched, stimulating and enjoyable read, rich in insights, and promises to be a classic both in epic studies and in postcolonial studies as it is an impressively broad and theoretically well-grounded reassessment of the epic from a postcolonial position.

The book explores “the intersections of local and national concerns with international perspectives” in post-1815 British literature and culture. In his examination of an impressive  array of source materials, ranging from periodicals to anthologies, drama, poetry, and fiction, Saglia stresses the cosmopolitan character of nineteenth-century British literature and problematizes the traditional view of its insularity and imperviousness to foreign influence. He pays due attention to the important role of translation in cultural interchanges. The opening section of Chapter 3 deals with early nineteenth-century theories of translation and the practices of British translators.

Overall, the book is an excellent comparative study – with a decidedly trans-European dimension. It enriches our perceptions of the later stages of British Romanticism and exposes us to both familiar and unfamiliar texts in an attempt to bring out the cosmopolitan character of British – and Irish – culture. The book will attract scholars and students of British, Irish and European Romanticism, as well as specialists in translation and literary reception studies.